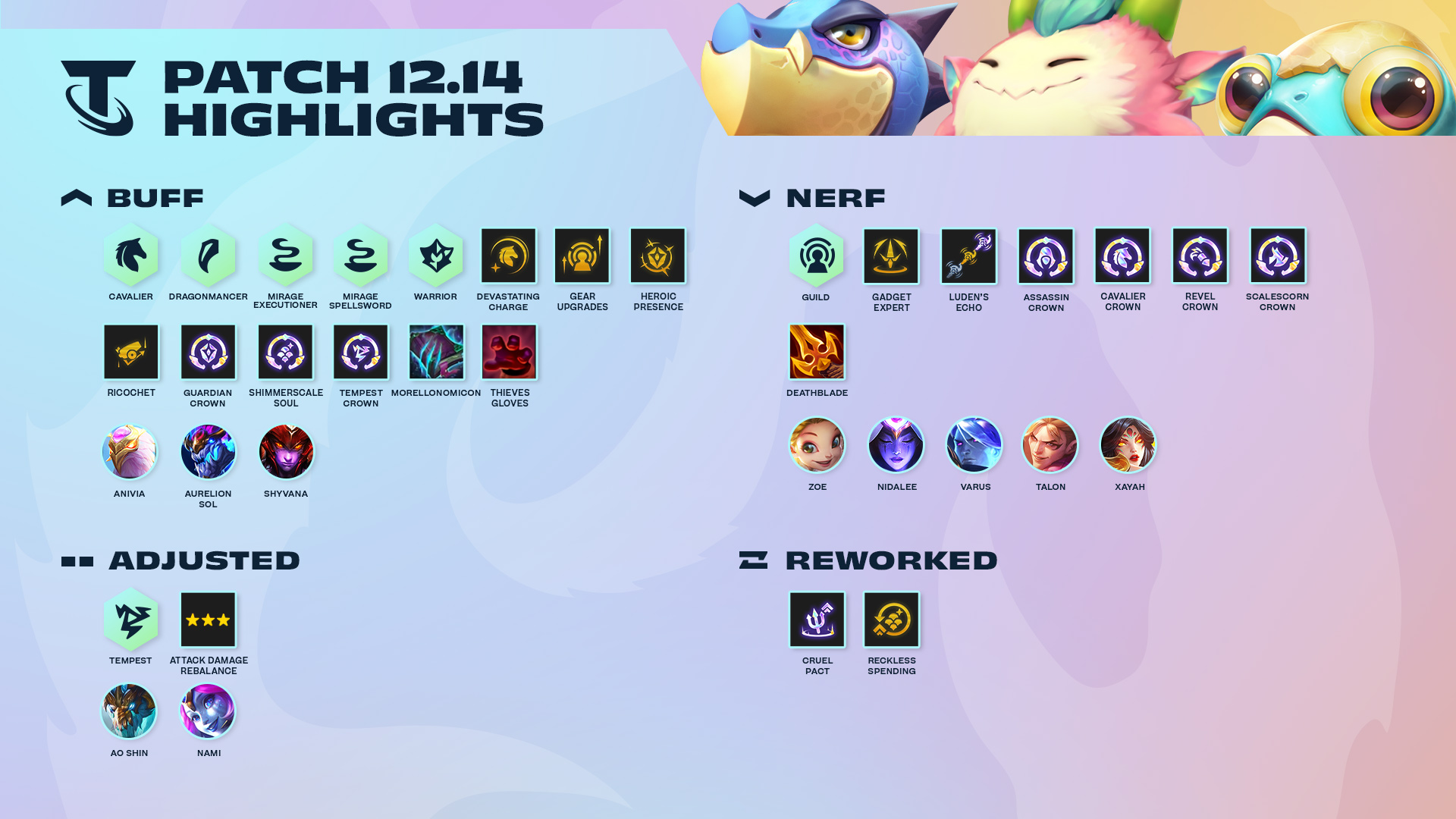 With how many times I’ve seen players lose to Krugs while open forting, they better be packing.

Large, like the amount of physical damage coming from auto attacks this set—an issue we will be dealing with this patch in our AD rebalance section.

Tempest has seen a lot of play as a two piece splash trait for crowd control, but the extra board-wide damage on top of that has turned that splash into a tsunami. For those who weather the storm to reach Tempest 6 and 8, your efforts will be rewarded with quite a bit more damage.

Previously, Warrior has relied on low-probability-but-high-impact empowered attacks that could one shot an enemy carry. With this change, these empowered attacks will happen more often, but won’t (literally) randomly one-shot a carry.

The Legend nerf was one of our final additions to this patch after seeing Legend comps emerge a bit too powerful during PBE and simulations.

Nami gets less healing and more feeling (pain) for your opponents.

Alongside the buff to Dragonmancer, this oughta make my Zoo comp (bird, bear, ram) flip my opponent’s board faster than they can flip me the bird—I mean, flip my bird.

30 cost units should feel worth their weight in gold, but 2-star legendary Dragons aren’t really burning a hole in your pocket. With a series of buffs to their level scaling, you can expect these Dragons to hit like a sack of 30 gold to the face—ouch!

As the only strong legendary (tier 5) Dragon prior to this patch, we’re improving Ao Shin’s health pool to allow him to cast before being bursted (that increases by 80% upon being starred up). With a more reliable cast, we’re raining in the power of Ao Shin’s ability.

Similar to how we treated Talon in Guild, we are nerfing our premiere Attack Damage item, because all units utilize AD.

Even with all the AD nerfs this patch, Morellonomicon just needs to be stronger. Right now Sunfire Cape feels like the only viable way to combat healing, so we’re adding some base stats in hopes of seeing players finally combine that Belt and Rod this set.

Thief’s Gloves is our most fun item. Let’s make it more fun.

We are rebalancing a number of our Soul/Crown Augments by adjusting the items or units they give.

While one of our most exciting Augments, Cruel Pact has been a bit of a trap card (strikethrough) Augment. It’s still our skydiving Augment as you pound your Health into the ground for levels, but now it comes with a parachute to help you avoid that 0 Health impact.

Gadget Expert has been strong the whole set, especially when taken early. With a full item of power, plus bonus damage, we’re shipping a nerf that should remind you that Gadgets (and Gizmos) were so last set.

Luden’s Echo early game has too high of a power ceiling, especially when paired with Mage openers, or something like Blue Buff Ezreal.

Most Shimmerscale compositions run units from outside the trait as their carry, so we’re adjusting Reckless Spending to benefit those use cases. By spreading your Shimmerscale items across your team, you’ll also be able to empower more units with this change. To compensate for those extra use cases, we are reducing the power of the damage amplification buff.

Small, like the overall impact of the incredibly lengthy changelist in the Attack Damage Rebalance section below this section.

Going through and buffing our underperforming chase traits to make sure they’re worth the chase. Jade and Revel are also receiving nerfs for their more splashable and easy to hit breakpoints.

Since a lot of Astral units get three-starred by the time you hit Astral 9, the vertical is significantly impacted by our AD rebalance (section below this one), so we’re giving Astral 9 a pretty fun buff that relies of the new James Webb images to discover more prizes from the stars.

Continuing the trend of making magic damage carries do less auto attack damage and more ability damage by increasing Ashe’s Volley casts at the cost of some attack speed.

Very small Idas buff, with a Sy’fen buff that’s actually a nerf to our dodge items, but a buff to the sanity of Sy’fen players around the world.

Because there are multiple ways to get Ornn Items (Portable/Living Forge, or time traveling and playing Fates), there’s a chance you can get multiple copies of these Ornn items. We want you to live the dream of being able to place two Infinity Forces on your carry, or two Anima Visages on your tank. And if you do manage to pull this off, send screenshots of your triumph!

Having your 8-cost Dragon transform into a 5-cost Legendary unit feels as bad as losing 3 gold. Recombobulator is one of our most fun Augments, so we’re removing the feels-bad moments from the equation.

With the changes below, we are addressing how Attack Damage (AD) scaling on 3-star units has created issues with TFT’s balance, as well as power fantasties both present and past.

Too much of a 3-star unit’s power has ended up in their damage from auto attacking. With every star level, units gain 80% more AD, leading to situations like a 3-star Nami or Vladimir dealing much more physical damage than intended. The source of power (and excitement) for these champions should come from their spells (they are Mages after all), so we’re pulling back on this AD scaling so we can focus more on scaling their unique abilities.

In addition to the AD rebalance, we’re giving a bit more of Nidalee’s AD up for adoption so Nidalee rerollers can adopt a new strategy—don’t worry, she’ll find a new home on my board now that she won’t be contested every game.

Some of these units (such as Nami and Lillia) won’t be getting an AD increase at one star since they’re already strong casters, or have been compensated with a spell buff.

It’s worth noting that with Ashe’s changes in the small section, she will be more impactful as a caster, so maybe try her out as the Dragonmancer Hero in a 2-cost reroll comp?

As mentioned above, we’re using this rebalance as a way to adjust the damage portfolio of our magic damage carries.

It is worth noting that the Varus adjustment here is intended to be a pretty large nerf for the king of patch 12.13.

The Xayah adjustment below is intended to be a larger nerf for her. Despite two patches of nerfs, Guild Xayah continues to thrive. Part of this comp’s power comes from Talon’s consistency which is getting hit here and in the Traits section above (see Large Changes).

Making clutch Rune of Allegiances more automatic. That was a car joke, by the way.